What an incredible evening to celebrate launching THE BENEFITS OF BEING AN OCTOPUS into the world! 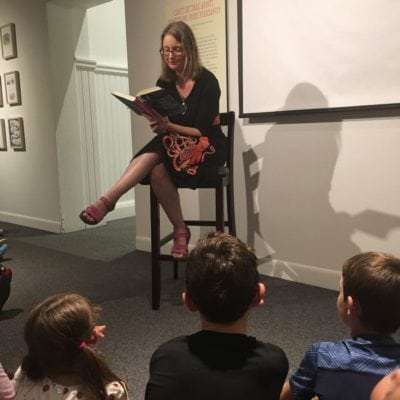 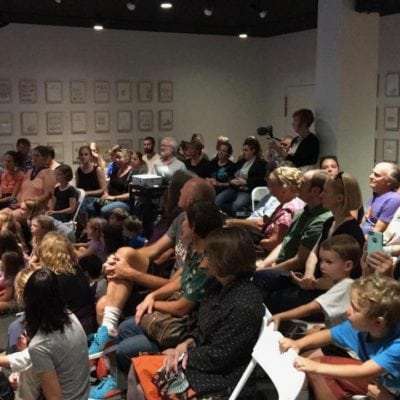 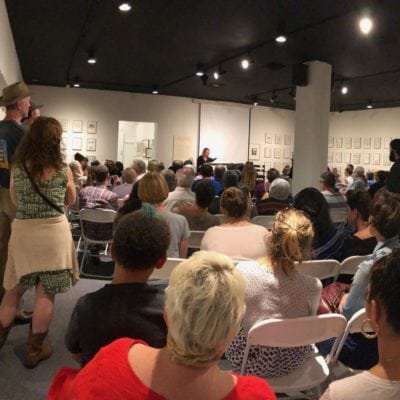 For one thing, 133 Octopus cupcakes were eaten. That alone would make a successful party. But then there was also AN EASY CHEESE TABLE! As in, Easy Cheese designs on a saltines made-to-order!

If that makes zero sense to you, here’s a sneak peek from page 10 of the book where Zoey is explaining how she single-handed keeps her little siblings happy when resources are scarce: “Because little snowmen out of Easy Cheese are the most magical thing little kids have ever seen. And Easy Cheese letters on a saltine is totally different than having to eat regular saltines. Aurora knew the letter A before she even turned two thanks to Easy Cheese letters.”

The evening also served as a benefit for the Women’s Freedom Center, and I loved the activity table they ran with Pin-the-tentacle-on-the-Octopus — which participants filling each tentacle with answers to the question: “What helps a relationship be respectful?”

Check out some of the fabulous answers along with some fabulous poses (as and with) octopuses on this highlights reel!

Finally, I loved being interviewed by Starr Latronica, the incredible director of Brooks Memorial Library. Kirsten Cappy, of Curious City, captured our Q & A on video for those who couldn’t make it to the event.

Than you so much to the Brattleboro Museum and Art Center for hosting the event!

If you couldn’t make the party, you can still purchase a signed copy of The Benefits of Being an Octopus from Bartleby’s Books. Amazon might have sold out, but the staff at Bartleby’s worked hard to make sure they can keep enough in stock! 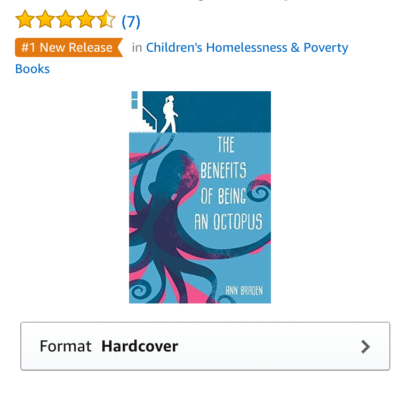 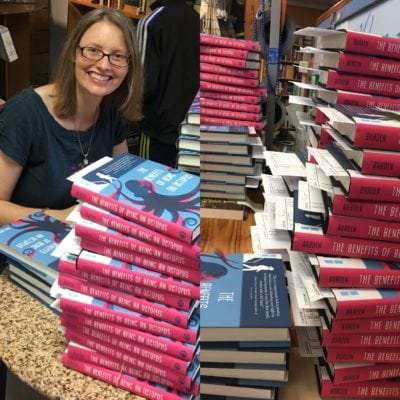 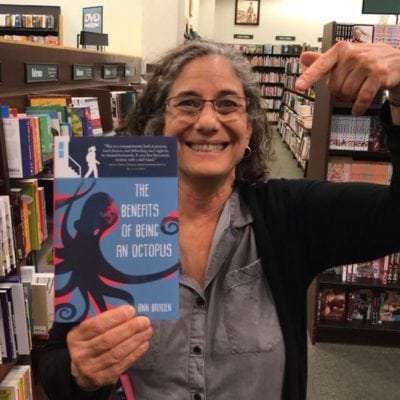 Tomorrow THE BENEFITS OF BEING AN OCTOPUS will launch into the world, and I am overflowing with emotions. A good chuck of those emotions are connected to how excited OTHER people are about this book! I’m honored to have been interviewed by high school student, Kester Necum. You can read Kester’s interview here. I’m also moved by the Emu’s Debuts post created by Christina Uss, Anna Crowley Redding, and Kat Shepard, that includes not only an interview of me, but also a conversation with four awesome educators about the book. Read it HERE. Finally, Hayley Barrett celebrates the magnificence of the octopus here.

I am counting down the hours until tomorrow with my many arms, and I will do my best not to explode before we get there.

It is VERY exciting.

THE BENEFITS OF BEING AN OCTOPUS has gotten its first trade review, and it’s a STARRED REVIEW from School Library Journal!!! You can read the full review at Barnes and Noble.

I’ve also been so touched by the reviews written by teachers and librarians who have read advance copies of the book and see their students reflected in the pages. And just the other morning, I got a review from Kester Nucum, a high school student, that moved me to tears. I’m pretty much over the moon about all of this. I’ve officially become a presenter with the Children’s Literacy Foundation! Their mission is to “inspire a love of reading and writing among low-income, at-risk, and rural children up to age 12 throughout New Hampshire and Vermont,” and I LOVE it! I’ve already gotten to visit two summer programs, Green Mountain Camp for Girls and the Title 1 Summer School program in Swanzey, NH. At Green Mountain Camp for Girls, we talked about persistence, running with your passion & how sometimes you find out you’re stronger than you thought. And at the summer program in Swanzey I got to talk about THE BENEFITS OF BEING AN OCTOPUS for the first time. This was my message:

1) Recognize your superpowers,
2) Name the obstacles in your path,
3) Find the courage to raise your voice,
4) Team up with allies who listen and support you!

In the book, the main character Zoey uses a Sharpie to give herself her own octopus tattoo to remind herself of her inner strength, and I was excited to give these kids their own temporary octopus tattoos to help THEM remind themselves of their own inner strength. One girl told me that she’s going to save her tattoo for when her cat dies so that it can help her remember to be strong!

I’m excited to be booking school visits for the coming school year! Check out my page for teachers and librarians, and contact me if you’d like to find out more! What a fast and furious — and fabulous — #MGBookChat we had last night on Twitter. I had the privilege of co-hosting it with Susan Sullivan, and we focused on the topic of “Building Book Access in Book Deserts.” If you missed it, here are some of the highlights! I am so excited about this book trailer that students at Brattleboro Area Middle School put together for The Benefits of Being an Octopus. To celebrate, I’m giving away one advanced reader copy of my book! If you’re on Twitter, here’s the tweet with the details. If you’re not on Twitter, leave a comment below if you’d like to be entered into the giveaway. I’ll pull a winner on July 1st.

And definitely make sure to watch this trailer!

#KidsNeedBooks Is Evolving to #KidsNeedBooks AND #KidsNeedMentors! We’re thrilled that authors & educators are teaming up to help students learn to love reading & writing. Building relationship between authors and classrooms can be so powerful. Imagine a book delivery from an author in the fall, staying in touch throughout the school year (via postcards or e-mail or Flipgrid), and a Skype classroom visit (or maybe even an in-person visit) in the spring. Kristin Crouch, Kristen Picone, Jarrett Lerner, and I are excited to help make this happen. We’ll be piloting a #KidsNeedMentors program this year, and we’d love for you to be part of it! AUTHORS: If you’re interested in being part of this, please fill out the Author Sign-Up Form. We’ll contact you over the summer to let you know who you are partnering with for the year. Thank you for being willing to participate!

EDUCATORS: THANK YOU FOR THE AMAZING INTEREST! WE CAPPED OUR PROGRAM AT 300 EDUCATOR SLOTS, BUT YOU CAN SIGN ON TO THE WAITLIST HERE.

We’ll be limited in how many connections we can foster, based upon the number of authors that sign up, but we are dedicated to making as many connections as possible. (Please note that Title 1 Schools will get preference.) We will contact you with more information sometime over the summer. Thank you!

We know it can take a village to help students develop a love of reading and writing. Here’s to coming together as a village and reaching as many students as we can.

Wow! What an incredible past few weeks it’s been. Since I wrote my first post about #KidsNeedBooks, hundreds of books have gotten into kids’ hands thanks to the generosity of over 85 authors, and giveaways are still going on. Check out this great article in School Library Journal about the movement!

We’re excited to keep this going, too. There are still some giveaways being offered (use the hashtag #KidsNeedsBooks to find them). We’re also hoping to to broaden out the program to foster real relationships between authors and under-resourced schools.

To stay in the loop about future giveaways and projects, you can sign up here!

We’re hoping to build a list of all the organizations that currently offer books to schools that need them. If you know about a book donation program, will you add them using this Google Form? (You can see organizations listed so far here.) This way we’ll have a better sense of how to best help, and it’ll be easier for teachers and librarians to know what opportunities are available.

If you have ideas for other ways to get books into kids’ hand, will you share them in the comments? So far on Twitter, we’ve seen some inventive ideas like the book drive that librarian Jill Dodge organized to give the kids who qualify for free-and-reduced the chance to go book shopping during lunch, the school-wide Book Swap that Laura Mossa is organizing, and the school in Canada that collected books from families and donated over 2,000 books to nearby schools that needed books last year. It would be wonderful if we could all share ideas with each other. I’m so thankful to all the authors who are helping to make this happen…Jarret Lerner, Intisar Khanani, and so many others. And I’m thankful for all of the teachers and librarians who are such champions for their students that online advocating for them!

Let’s all stay connected, and let’s all keep working to help kids have access to good books!