When I was a kid I was shy and sensitive, but then I found out that I was a whole lot stronger — and braver — than I thought. As I found my confidence, I realized I had things I wanted to say. That’s when I starting to write. (Before that I had never thought creative writing was something I could do.)

The first manuscript I wrote showed me I actually could write a novel (I typed it one-handed while my newborn son slept in my arms, so it was a very short, but still!) Of course, it was not worth anyone’s time, so I wrote another. And then another. And then… you get the idea.

In the meantime, other things were happening. I had been a middle school social studies teacher before my kids were born, and I had always taught my students that for democracy to work regular people had to make their voices heard. When the school shooting happened at Sandy Hook Elementary School in Newtown, CT, I couldn’t turn away. I knew something had to change, but even though the polls showed that the vast majority of Vermonters supported stronger gun laws, the conversation couldn’t even be brought up in our statehouse. I tried to find an organization in the state working on this so I could volunteer for them, but there wasn’t one. So, I ended up starting my own. I didn’t set out to create a whole organization, but I started an online petition and soon agreed to organize a press conference (I had never been to a press conference, much less organized one), and one thing lead to another. It’s amazing what can happen when you say YES to things. Also, when bullies showed up to try to get me to stop talking (and when I realized if they succeeded, they’d try to do the same to the next person speaking her mind), I found out that I wasn’t necessarily the shy, sensitive person that I thought I was. Instead, it turns out I was pretty stubborn, and way more fearless then I could ever have imagined. Sometimes the most unlikely people can help you figure out who you really are.

We called the organization GunSenseVT, and it focused on championing the common ground within the polarizing issue of guns. And in the spring of 2018, after several years of hard work, Vermont passed landmark gun reform and showed that you can be both support the second amendment AND support the safety of communities! Students from a high school in Los Angelos who received love postcards, then came to Vermont for an epic joint love postcard-making party!

After the 2016 presidential election, I also helped to create the Local Love Brigade  to send love postcards to people who are facing hate. We started it where I live in Vermont, but soon awesome people created chapters (with a Facebook group for each!) in lots of other places, too, including Georgia, Maine, Massachusetts, New Hampshire, New York, North Carolina, Oregon, Texas, Virginia, Washington, and Wyoming. The world needs us to fill it with love, and it turns out it’s a pretty darn satisfying way to spend time. And even though most of the time you can’t see the impact you’re having, sometimes you do. If this sounds great to you but there isn’t a Love Brigade in your state yet, it’s super easy to start your own. Big, bold change starts with one small step, and the instructions are right here. You (yes, YOU!) should totally do it.

Throughout these years, I kept writing and my writing got better. Because I had gotten used to putting my heart out there for everyone to see, and I started putting my heart directly on the page, too. And most of all, I had learned I had the courage to say hard things. I’m now so excited to have become part of the kidlit community and to have connected with so many amazing children’s authors and educators. Along with author Jarrett Lerner, I helped to start the #KidsNeedBooks Twitter movement. Then, we teamed up with superstar educators Kristin Crouch and Kristen Picone to start the #KidsNeedMentors program to pair up authors and educators so that students can better discover their love of reading and writing. It’s inspiring to see what happens when people come together.

I also co-hosted the podcast Lifelines: Books That Bridge the Divide, along with Pakistani American author Saadia Faruqi. I loved getting to interview librarians and others about the ways that books that help us bring people together. Also, Saadia’s debut chapter book, Meet Yasmin, is amazing and both of my kids are obsessed with it.

Finally, here are a few last things about me:

1) We have rescue kitties that destroy every food item we accidentally leave out (except for fruit and cottage cheese, but honestly they eat everything else!) They’re named Boomer and Justice. Boomer is, of course, the shy one whose guilty expressions always give them away. (In this picture they have been devouring a bag of bagels.)

2) When my daughter was born, I discovered my hidden talent of baby-and-stuffed-animal-arranging. Because, who knew? 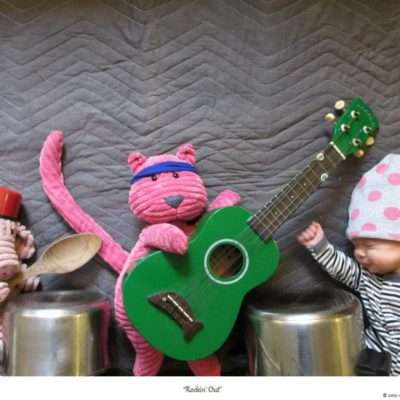 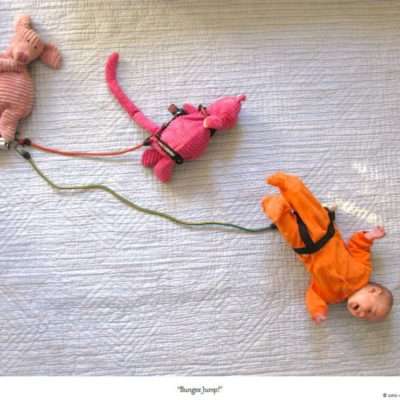 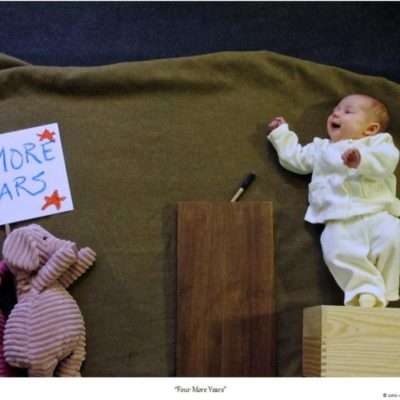 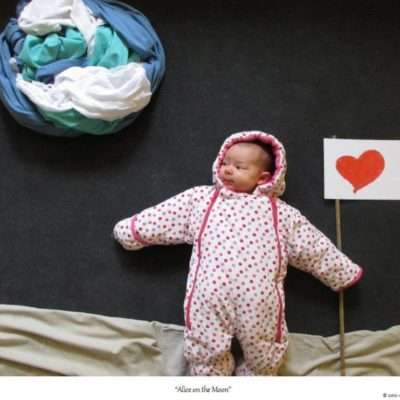 3) In the first 30 years of my life when I thought I couldn’t write, I should confess that I did write one decent (very short) story. It was in 4th grade, and it was titled The Case of the Double Daring Dragon, and it focused on a character named Emphysema Dandruff.

But as you know, I had decided that story’s decent-ness was a fluke. After all, I’ve never been the person who writes pages upon pages in a journal. In fact, when I’ve been forced to keep a journal in the past, I’ve written them in bullets. Extra words made me itch.

I still remember the day when I was sitting on our old couch, nursing my newborn son (for hours on end) and reading Louise Erdich’s Bluejay Dance. I had just read the section about her walking to her writing studio in the woods (coincidently with her newborn), and I put the book down.

My first thought was: “How amazing would it be to be a writer?”

My second thought was: “But creative writing is one of the things I KNOW I can’t do.”

My third thought  — because I was still on that couch 2 hours later — was: “But if I could, what would I write?”

And that was the beginning. The years that followed were filled with crazy long hours of work, determination in the face of rejection (and more rejection and even more rejection), and so much learning. But the deep thinking that’s required with writing grounded me, and the characters that emerged were people whose stories needed to be told.

So, if you are ever longing to do something but you KNOW it’s something that’s impossible for you, just ask yourself “What if?”

Because if you’re willing to put your voice out there, it’s amazing what can happen.

Kids VT: “Standing Up, Speaking Out”

“Political Meets the Personal at the Brattleboro Literary Festival” 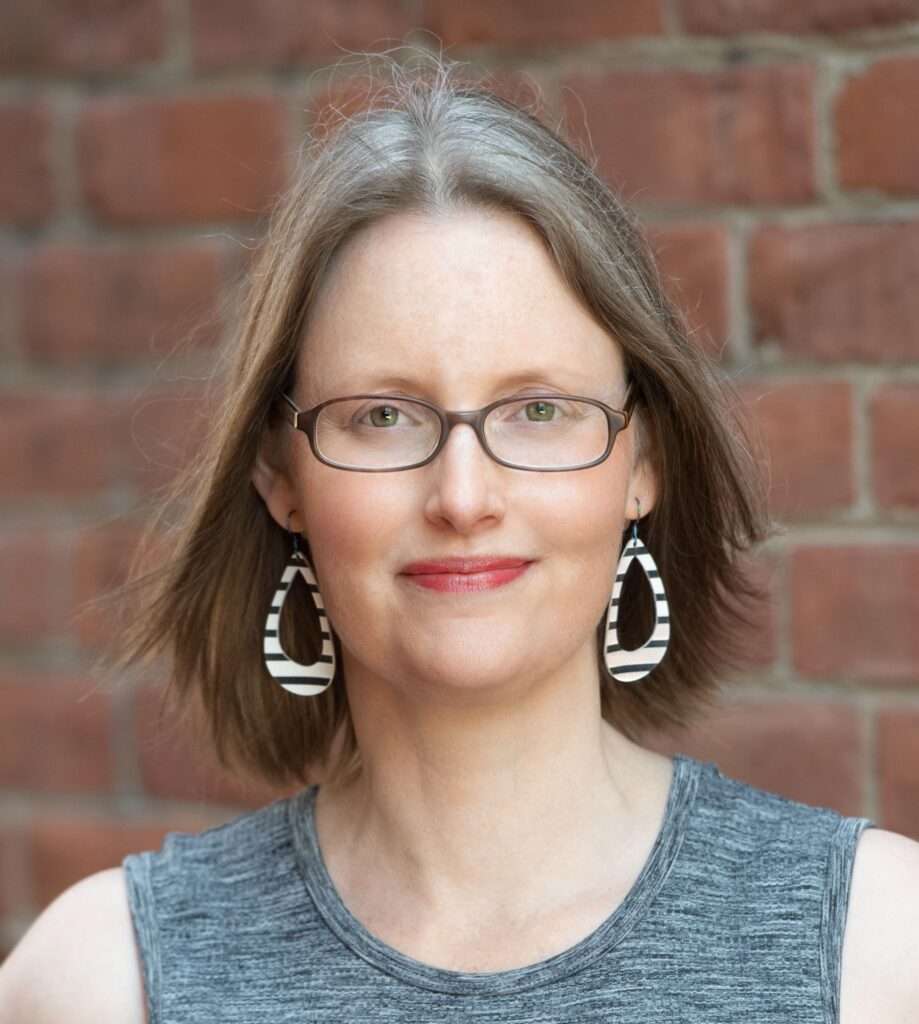 Ann Braden writes books about kids learning to stand up for themselves even when it’s hard. Her middle grade novels THE BENEFITS OF BEING AN OCTOPUS and FLIGHT OF THE PUFFIN have earned widespread recognition, including NPR’s Best Books, Cybil Award finalist, and being named to over a dozen state lists. Ann founded the Local Love Brigade, which sends love postcards to those who are facing hate. She also founded GunSenseVT, a grassroots group focused on championing the common ground on the issue of guns in Vermont, which helped pass landmark gun violence prevention legislation. Previously a middle school teacher, Ann lives in southern Vermont with her husband, two kids, and two insatiable cats. Her next middle grade book, OPINIONS AND OPOSSUMS, will be published by Nancy Paulsen Books/Penguin Random House in May 2023.

I have a teacher heart and I have a writer heart.

One of my kids casually referred to this as Instan

The first thing I fell in love with when getting t

Wow! Check out this incredible Flight of the Puffi